Waingaro Forks on the Kill Devil track had our To-Do list for some time, but the thought of carrying overnight gear up the Kill Devil was a bit off-putting. So when Rob Kay suggested we do it in and out in one day we said "You're on." 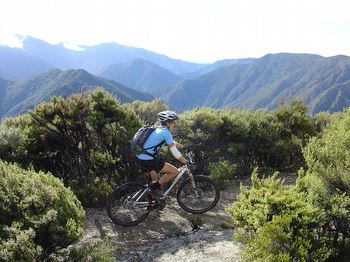 Saturday the weather looked great so we were up at sparrow's fart and riding soon after 7.30am to miss the heat going up the hill. Knowing we had a long day ahead Liz and I took it easy going up the zig-zags walking a lot of bits we'd normally ride whilst Rob and Hamish preferred riding. An hour and 45 minutes saw us at the top of the main climb after re-joining Hamish's chain for the first time. Too much power these young guys. He'd snapped another chain a few days before at Kaiteriteri and broke his chain a second time later on this ride; three times in a week, can anyone beat that? After the second disconnection Hamish decided to adopt a lower geared technique, which paid off. 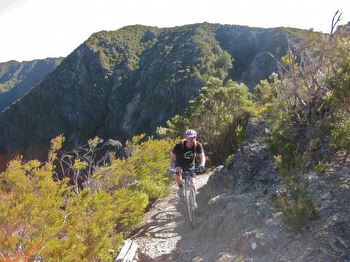 Along the ridge to the Riordan's turnoff is some of the best technical riding of the trip. The new Gravity Dropper seatpost proved its worth on the steep rocky descent before Riordans, so put one on your shopping list if you like the steep technical stuff. 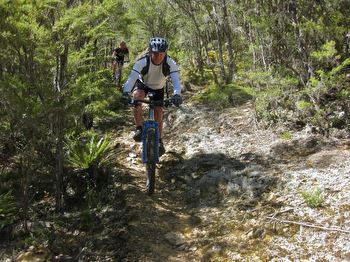 Three hours on we began the manuka lined descent into the Waingaro. The track was a bit rough to start with and had us wondering what the climb back out would be like. Once over Skeet Creek, the National Park boundary, we entered red beech forest with the track carpeted in a layer of crunchy cornflake leaves. In places vegetation encroaches the track making high speed a dubious proposition with the odd log lurking in the weeds. There were a few windfalls causing us to be on and off the bike, but not too bad for a bush track. About 1.4 km before the Waingaro Forks Hut the track reaches river level and follows a river terrace. The track turns into a rocky sidle a few hundred metres before the forks so we ditched our bikes and walked the remaining 10 minutes to the hut. Two hundred metres before the hut a swing bridge spans a spectacular gorge where the river cascades down a cataract. Having a GPS was handy as we knew we weren't far from the hut. The total distance in was 18.4km with 1030 metres of climb and 688 metres of descent taking 4 hours 30 minutes total time. 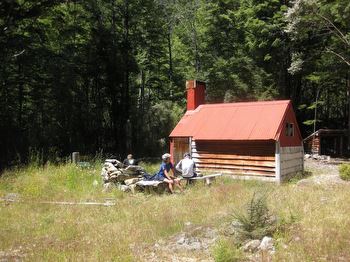 The old hut has been tastefully restored by DoC with sawn slab siding and a big open fire. Last time we were here 30 years ago there were sack bunks and rats running through the rafters, so it was a great improvement.
It was interesting to see in the hut book a few Club members have already been in to the hut and stayed overnight, with only 2 solo riders doing the in and out in one day.
Heading back out the climb was a pleasant surprise with the grade easier than it looked on the way down, even the top rough section being rideable. It actually took just 10 minutes longer to the Riordan's turnoff going up than down, probably because we had fewer stops and moved pretty steadily. It's a good idea to top up with water at Skeet Ck as it is the only water along the track. Another hour along the ridge with some excellent technical rock saw us ready for the big descent. I dumped my bike a few times on some of the corners coming down as it was hard to hold concentration after 8 hours of technical riding. In fact I think we'd all seen enough rock for one day with tired wrists and arms from yarding on the stoppers and lifting over rocks. 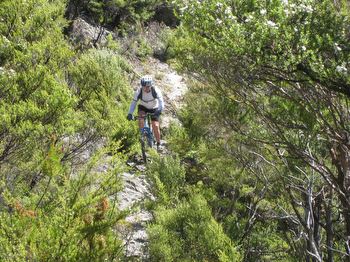 The ride out took us three and a half hours and I think we were more buggered than from riding the Heaphy in one day. Unless you are really fit I'd certainly recommend doing this ride over 2 days. It is a great back country epic with difficulty up to grade 5, so not to be taken lightly. Carry enough spares and tools to fix your bike as there are plenty of opportunities to break your bike.

Riders were Rob and Hamish Kay, Liz and Alan Eskrick.
Update January 2014. We understand that DOC have cleaned up the section of track from Riordans to Waingaro Forks.