This year’s expedition was to British Columbia because it has such a huge reputation for miles of single-track. My riding buddy Sharon Prutton had entered the BC Bike Race. Seven days racing on some of the best trails in Western BC. I decided that I would prefer to look at these places in a more leisuredly fashion so we agreed to meet at the end of the racing and explore further afield.

After assembling our bikes we had a pleasant ride on the cycle trails of Vancouver and around Stanley Park. It was quite a contrast to our next ride where we checked out one of the Enduro stages of Sharon’s race, a trail called “Expresso” on the hills of North Vancouver. There were big rock features to cross as well as some of those famous scary structures that feature in U-tube videos. Shaza decide she might have to walk these in the race but as it turned out the pressure and excitement of racing took over and she didn’t get off her bike! 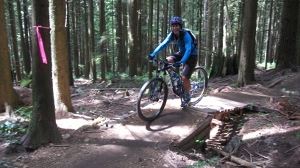 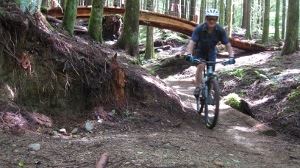 Sharon checking out "Expresso" before the Espresso.      Selfie with the bridge on "Aloha"

In Powell River I rode the course of the BC Bike Race. One of the cool features was on a trail called “Aloha” that had Hawaiian dolls and a bridge that was specially built for the race. The trail went under the bridge then curved up the hillside and looped over the bridge. 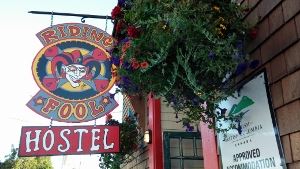 
I stayed at the world famous “Riding Fool Hostel” in Cumberland on Vancouver Island. It has a bike shop and café in the same building – how organised is that? Cumberland had a great network of trails starting at the end of the street of the Hostel. Again there were lots of structures on trails like “Thirsty Beaver” and “Mad Butcher”. I was told that a rider was tackling a tricky teeter-totter on “Mad Butcher” when he looked down to see a Cougar lying beside it. Needless to say he didn’t stop for a selfie.


I had an “Island Mountain Rides” trip from Cumberland to ride on Hornby Island. Roy and Susie from Scotland joined me and our guide, Gaylyn. We took Gaylyn’s vehicle across the ferry to Denman Island, drove to the other side of the Island, then abandoned the vehicle and took our bikes across the ferry to Hornby Island. Straight off the ferry we were climbing the trail up the edge of the cliffs so it didn’t take long before we had great views back to Cumberland. We carried pebbles up to the highest point (about 300m) to contribute to a growing cairn. Good karma! Smooth trails were the norm. Probably the best known was “Four Dead Aliens” a cool swooping trail down a gully. We took time out to visit the craft market and had a swim at a gorgeous beach. Great day!


In Squamish I caught up with the race and Sharon again. I joined in the race by setting off 5 minutes after everyone had left and didn’t take long to catch the carthorses at the back of the field. It was fun working my way through the field and not having to think about the direction at the next junction. The route led us in to some great trails, including the fabulous, famous “Half Nelson”. I also came across a couple of crashes and was able to provide some duct tape to help stabilize the end of a stretcher.  There were Enduro stages in the race, usually marked by two dancing gorillas and loud music! 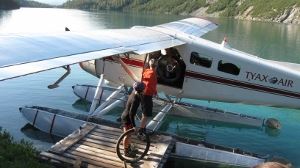 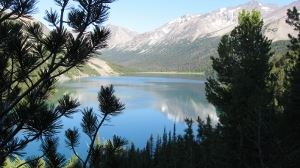 
I also rode in the final day’s race at Whistler. It was shorter but still gave us a good sample of the variety of trails including everything from all out downhill to flowy, smooth cross country. It began to rain near the end of the race, great timing.

After a few days we headed east to the Chilcotins where we flew in to a remote Lake in a float plane. It was a gorgeous clear morning. Warner Lake as we landed was calm and mirroring the snowy peaks around it. It was six hours of blissful riding as we cruised back down the valley and made a side trip to Spruce Lake on the way. Stunning scenery and a great trail all the way. 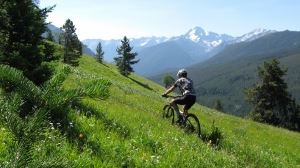 
After a couple of pleasant days in Sicamous we continued to Revelstoke. Bad weather was forecast for later in the week so we headed for our first epic, Keystone Standard Basin on our first day. It was about 50k out of town and 20k up a winding gravel forestry road to the trailhead. A tough initial climb soon turned into easy winding trail among the stunted trees and alpine meadows. Small lakes abounded with patches of snow in the shadier corners. This was the first day the trail was open as it had been off limits for Caribou calving. We were surprised to find another group of riders at the far end of the ride, including a Kiwi. It was an out and back ride of about 22 km with rock, waterfalls, exposure, and miles of magnificent mountain scenery. 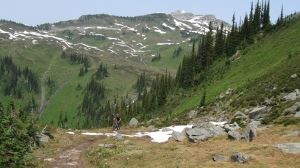 
Frisby Ridge was the other epic from Revelstoke. It was created relatively recently and involved about 700m climbing over 13 km to a small lake before turning around to whoop back down. As we climbed there were more and more snow patches. They were pretty difficult to ride, the front wheel just slid out or you became bogged down. We reached the highest point though and revelled (that’s what Revelstoke is about) in the descent. 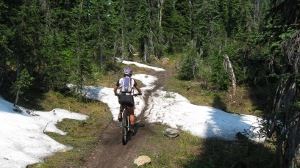 
Heading south from Revelstoke we had a nice ride in historic New Denver including a unique Flying Fox river crossing. Then we visited Nelson BC before heading to Rossland, a pleasant small ski town near the US border. There was a great trail network that we explored over three days of relaxing rides before we tackled the big one, the Seven Summits. 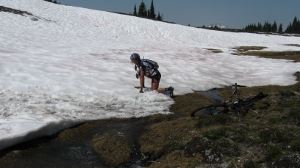 
The day dawned cloudy and cold but the locals told us it would burn off so we set off in the shuttle to the Nancy Greene Trailhead. As we climbed the weather became claggier, windier, and colder and it began to snow. We put on all our wet and cold weather gear but the crud persisted and our brake fingers became frozen. We decided to pull the pin and take one of the optional exits off the top of the range. Despite it appearing straightforward on our map it was anything but and we went round in a circle to end up back on the main trail. We decided to push on to where there was a ski field road crossing the trail and we were able to use that to make our escape.

Climbing to the crud on Seven Summits


Next day we cleaned our bikes in preparation for our trip home. It was a nine-hour journey back to Vancouver, leaving unfinished business behind us, and an excuse for coming back to sample more of the Beautiful BC riding.