As part of its vision "To make the Nelson Region a national and international mountainbiking destination" the MTB Trails Trust has formulated a plan for the development of a network of back country trails in the Nelson - Tasman Region. The Trust acknowledges the significant support it is receiving from the Department of Conservation and Hancock Forest Management to bring this plan to fruition.
Epic Trails can be defined as back country rides over mostly natural terrain, often through native bush, and taking several hours to ride. Epic trails should be as natural as possible wih as little disturbance to the terrain as possible.


Many of the proposed mountainbike trails will be on existing tramping tracks with only a minimum amount of work done to make them rideable. They would be aimed primarily at advanced mountainbikers. The Epic Trail logo will be used to designate these trails.

Another important track planned for the Epic Trail network is to construct a track up from near Hackett Hut to Mt Starveall Hut and connect with the Starveall - Lee Ridge route that some of us have been riding for several years. From the Starveall - Lee Ridge a new advanced track will drop 300 metres off the ridge before the trig into Waterfall Creek then sidle out gradually climbing 200 metres to Lucy Creek ridge. It will then follow down Lucy Creek Rd then further down drop beside Lucy Creek and follow it down to the Lee River. From here it will follow down the true right bank of the Lee on the unformed legal road to meet Meade Rd. A line has been cut from the end of Meade Rd to Lucy Creek to determine the feasibility of the route. We also propose another intermediate trail dropping from the upper end of the Starveall - Lee Ridge into Waterfall Creek. This would give a 45km loop with 34km of singletrack which we anticipate will be as popular as the Dun Mountain Trail when completed. Hancock Forest Management have recently agreed to open the Lucy Creek area for us to exit from Waterfall Creek, but this is still to be formalised. We also need to survey the route out of Waterfall Creek for feasibility as it is very steep sideslope. We are working with the DOC Area Office in Motueka to put together a Management Agreement for these trails.

Also on our list is improvement of the Rocks Hut to Totara Saddle tramping track. This has been ridden by some keen riders, but there is a couple of hours of pushing so it isn't done very often. There is also the possibility of a track dropping off this track down into the Roding to form a shorter loop.
From Rocks Hut we would also like to upgrade the track down to the Pelorus at Midi and then down the Pelorus to the road end so that is more mountainbike friendly. Again this track has been done on mountainbikes but it isn't a picnic. These tracks are administered by DOC in Picton so we will need another Management Agreement with them to allow us to proceed here.

Of course there are existing trails that already fit the Epic definition such as the Dun Mountain Trail, Heaphy, Kill Devil, Barron Flat, Rameka, Sunrise - Peaking Ridge, Wakamarina, Nydia Bay, Waikakaho Walkway (Linkwater Long Cut) and we could add Queen Charlotte Track and The Old Ghost Road when it is completed. Where else in New Zealand do we have a lineup like this?

This is a map of existing "Epic Trails" in the hills east of Nelson and Richmond (purple), and proposed ones in red. Several of these are existing tramping tracks that need some work to make them more suitable for mountainbikes, whilst the Hackett-Lee ones would be new routes apart from the old tramping track along the ridge running SW from near Starveall Hut. 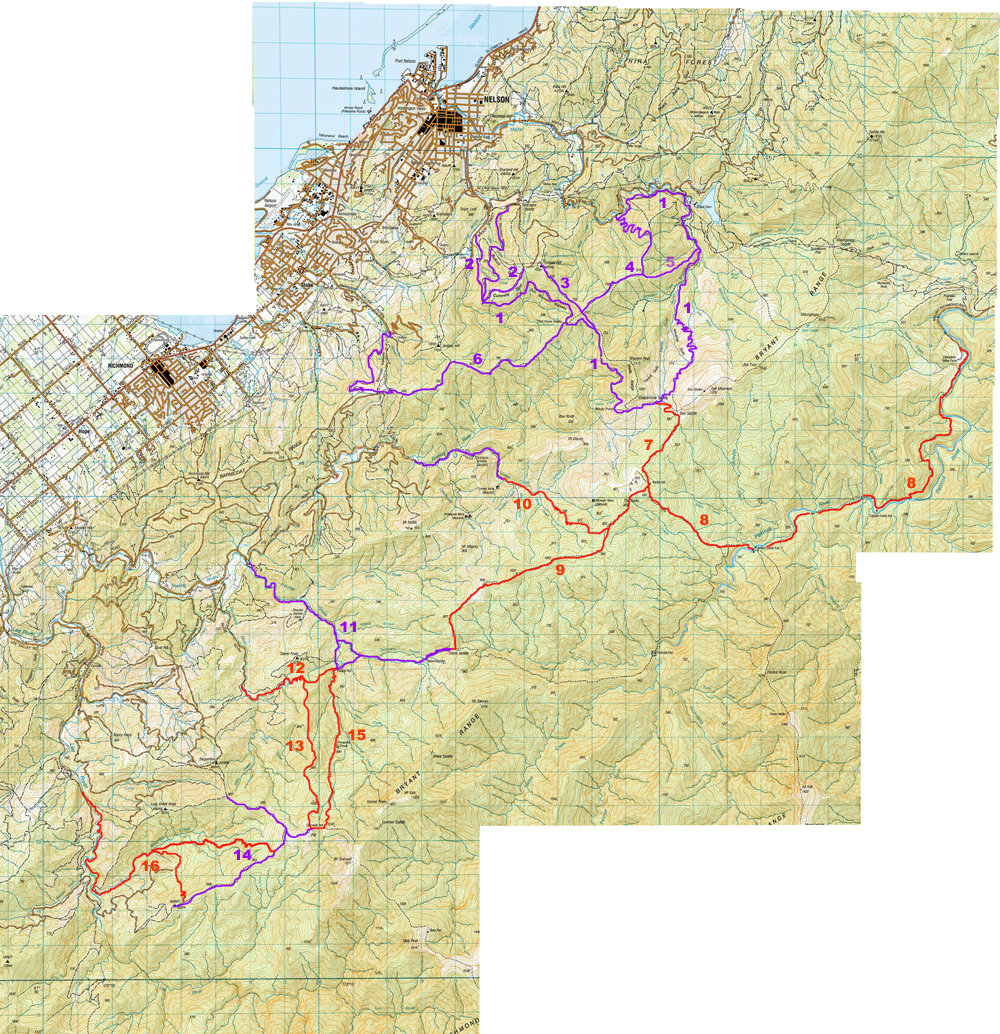 Our priority is the Hackett-Lee track. It will require approximately 11km of uphill track at a maximum grade of 10%. This would create 3 or 4 different loops with about 34km of singletrack which would, we hope, rival the Dun Mountain-Coppermine Loop. Update July 2019: DOC has scotched the route up from the Hacket so we will not proceed with this section of the trail and the Lee Valley dam has created uncertainties over the exit down the Lee.

During our meetings with DOC Nelson Lakes Area Office to discuss developing the Big Bush - Teetotal Loop and a track from Beebys Knob to Red Hills, it appeared there was also an opportunity to develop a network of trails close to St Arnaud to make the village a mountainbiking hub with enough for four days of riding. 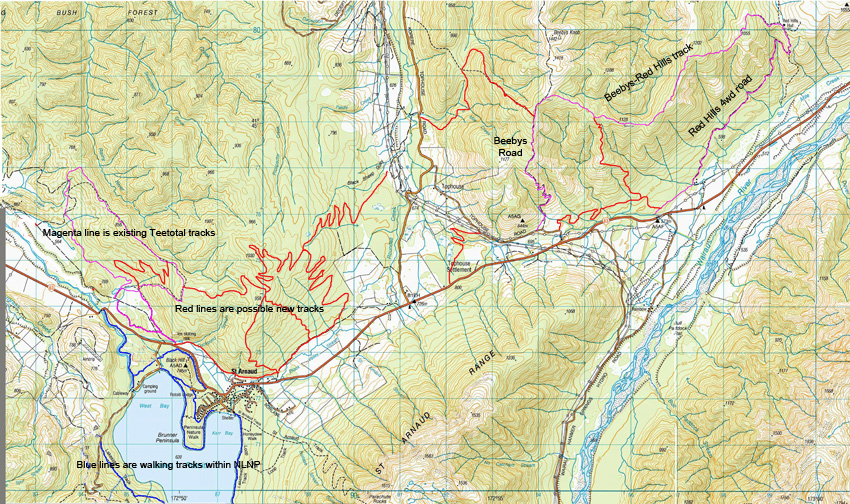 To date the Trust has entered into a Management Agreement with DOC Nelson Lakes to develop and maintain trails in their area. Once routes are surveyed they will be approved on a case by case basis. The Beebys Knob - Red Hills Track is now 90% complete (September 2014).
A new track, Sidewinder, has been cut along the perimeter of Teetotal Flat to add more singletrack to the Big Bush loop and a section of benched singletrack to be incorporated into the Big Bush loop constructed in a stand of Douglas Fir during a track building seminar run by the Club for DOC personnel at St Arnaud.
A new uphill track is under construction in Big Bush to access a proposed network of descending tracks above the village. The uphill track is expected to be complete by November 2014. 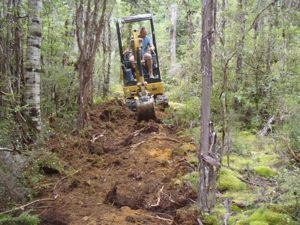 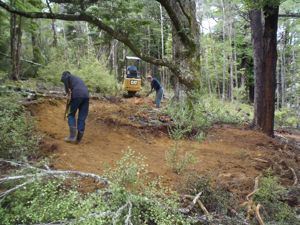